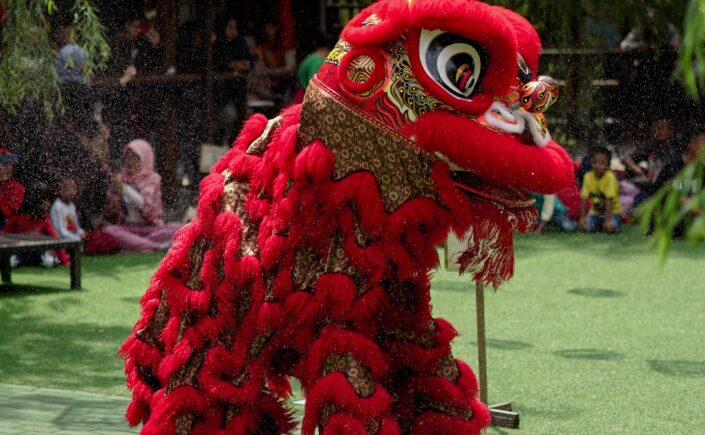 Lion dances are noisy affairs. The entire troupe will come in a small lorry or two. You can hear them from pretty far because they will beat their drums even before they reach their place of performance.

At the point, let me proudly acknowledge that Malaysia has produced international champion troupes. The awesome style which involved multiple high poles was invented here. But I digress.

Usually, the troupe is made out students and former students of a martial arts schools, headed by the sifu (the master). There are different roles in the troupe:

The lion:
The focus of the whole performance. Normally, this is played by the two strongest students – one holding the very heavy lion’s head, the other playing the back half of the lion’s body.

The main drummer:
He/She is the one that starts with the drum-roll equivalent and beats almost none-stop throughout the whole performance.

Cymbals player:
The person who provides the soft clangs and occasional loud ‘Chang‘ every now and then to dramatise certain moves.

The assistants:
Normally, these will be the junior students. They are there to help setup, place the poles at the exact positions required as well as pack up. One day, they will want to be the lion.

The lion dance troupe demonstrates how team synergy is achieved by optimising the strengths of the individual members.

Who is the strongest person in the troupe?
Many will say it’s the person holding the lion’s head. The person playing the back half of the lion’s body is the strongest physically. It’s literally a back-breaking task. He’s bent over most of the time, has to hold up his compatriot while standing or hold on the him while he pretends to fall off the pole. He also has to push his compatriot when they jumped forward by a few poles.

Who provides the lion its character?
The person holding the head has to manage the lion’s expressions by blinking, winking, and even make cheeky poses.

Who is the leader?
Some will say it’s one of the two playing the lion. The truth is the main drummer is the leader. He signals them when to starts and he sets the tempo. Sometimes, he speed up, sometimes he slows down. The lion literally dances to his beat and his beat alone. The leader does not have to be the strongest.

Who is the one that is most knowledgeable?
You don’t even see him in the performance. He is the sifu. By the time we watch the performance, his job is already done. He has trained them well and they are able to do it on their own now.

What about the assistants? How do they help?
Do we think that the dance will be successful without them? Placing the poles is precision work. Setting up and packing up is not for the careless, mindless, or disinterested.

And there you have it. A high-performing team is the result of optimising each member’s strengths. Do you know your team-members’ strengths?